Running is a Family Affair for the Di Carlos

John Di Carlo didn’t begin running until he was 60 years old following a cardiac event, and now he can’t stop.

Now 85, John and his son Al are planning to run the half marathon in the St. Luke’s Via Marathon, which includes a marathon, half marathon, and marathon relay on Sept. 8.

Al isn’t really a committed runner, but does so with his father, who started running in 1994 after undergoing an angioplasty following chest pains. By 1998, John Di Carlo had run half marathons in Allentown and Philadelphia, and full marathons in Philadelphia and New York City.

John ran his first NYC Marathon in 1996 and has run it eight times, along with also finishing the Philadelphia and San Diego marathons. He also has taken part in more than a half dozen marathons in Memphis, Tenn., Philadelphia, and, of course, Allentown.

In 2003, John ran the New York Marathon with his children Joann Mertz and Al, and with his brother Gaspare.

“My sister came up with the idea for us all to run,” Al said. “I was never a runner. I didn’t think I could run 100 yards, let alone 26.2 miles. My sister and I started training together, and along with my uncle and some of my dad’s friends, ran New York. It was, by far, the best feeling running together as a family.” 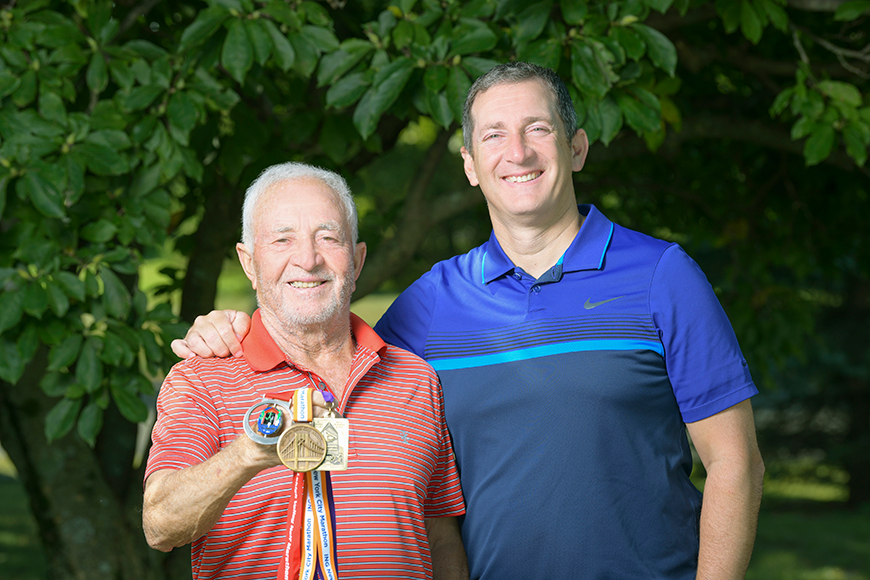 Throughout the years, running has become a family tradition with John serving as the family and team leader, even from his winter home in Florida. John has transitioned his running into walking on the beach and treadmill these days. 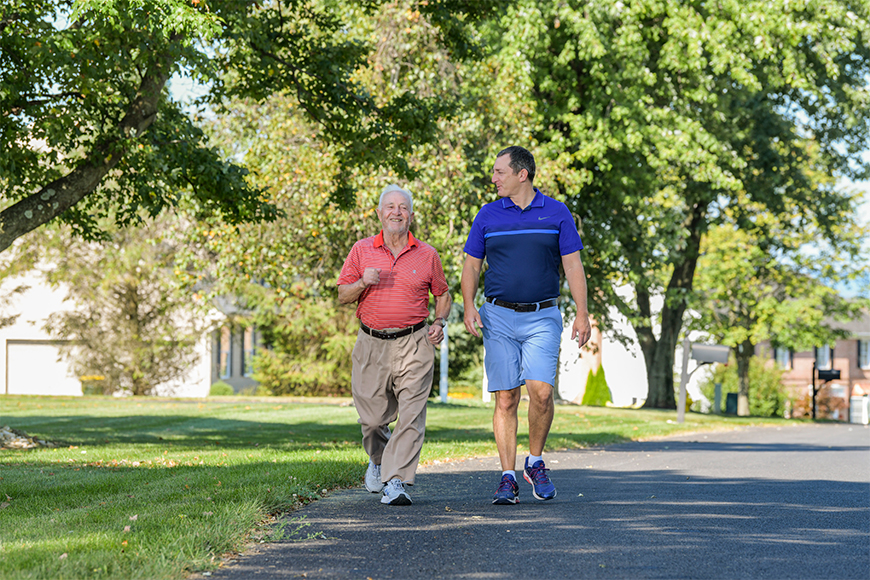 “Out of the blue last March, he asked me if I wanted to do the St. Luke’s Half Marathon last spring,” Al said. “It had been two years at least for me, and I couldn’t get in shape in time, so we targeted the St. Luke’s Via Marathon on September 8.”

John was willing to do the half marathon as a walker. He can walk a 16-minute mile pace, but may not have made the course-closure cutoff, so the family didn’t’ want him to start and not be able to finish.

Al says that he and his dad are committing to the half marathon.

John says he is running four miles on the treadmill three times a week and doing a total of 16 miles a week in preparation for September.

“He’s the leader of the pack,” Al said. “He’s the one dragging us into it. It’s amazing to me that at 85, he walks enough to do this, and his pace is pretty quick. He walks faster than I run!

“We are a very, very close-knit family,” Al continued. “Running aside, doing this with him is something I’ll always remember. My children are eight 10 and 17. I said I will never run a marathon again unless they ask me to, but I will run a half marathon.”

At 85, John says this will be his last half marathon, but his family has heard that line before.

“I’m sure he will ask us to run again next year,” Al said.


Al Di Carlo is the former assistant sports director at Service Electric 2 Sports has launched his website, D11SPORTS.COM to cover and promote high school athletics in the Lehigh Valley with St. Luke’s as a sponsor and partner.

The website, in partnership with St. Luke’s Sports Medicine, is covering 10 high school football games of the week with multi-camera broadcasts, replays and graphics, utilizing student reporters from the respective high schools to give sideline reports.

The D11SPORTS.COM website, through the help of students, will also be covering other sports like soccer, field hockey volleyball, tennis, along with the mainstream, football, basketball and wrestling throughout District 11, whether it is in Schuylkill County with North Schuylkill High School or in Monroe County with Pocono Mountain West.